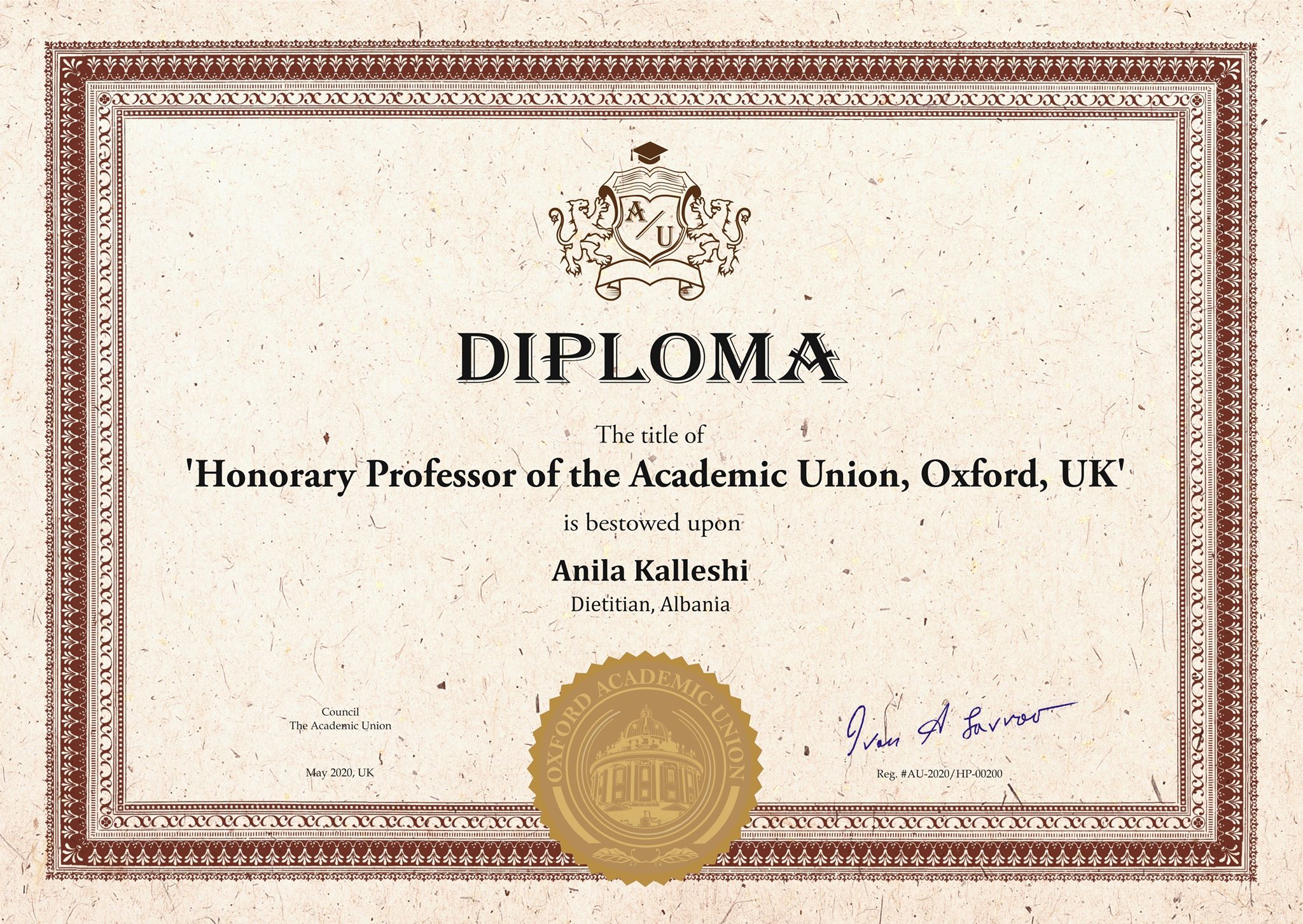 1. GENERAL PROVISIONS
The title was established by Academic Union, Oxford with the support of the Club of Rectors of Europe Conferment of this title is a symbol of credit and expression of honor to people, who are promoting social and intellectual progress of modern society, integration and empowerment in the field of science, culture, business, economy, development of innovative processes in the world.

2. CANDIDATES’S ELLIGIBILITY
The right to offer one’s candidacy for the Title of Honorary Professor of the Academic Union, Oxford (AUO) belongs to AUO and Club of Rectors of Europe Council, non-profit organisations, professional and scientific unions.

i. Lecturers and academicians, acclaimed mentors, who have an academic title of Professor or Master Degree / Doctor of Philosophy Degree, who work in higher education institution or actively collaborate with it; they have outstanding achievements in research, educational and organizational activities.

ii. Public officials, artists, attaches, CEOs of innovative companies and organizations of any form of ownership, whose activities and achievements develop education, science and economy significantly, influence positively intellectual potential, enhance prestige of the candidate’s country. The title is awarded for special merits in integration of research and development, implementation of innovations into business processes, facilitating national economy growth.

2.2. Candidates will be assessed on a number of different criteria including, but not limited to:
– Preparation and advanced professional training of professionals, postgraduate and doctors
– Establishment of relevant structures (chairs, departments)
– Development of an innovative project
– Development of new or existing theories in science, tech and economics
– Publication of monographs, text-books and learning materials
– Participation in regional and international conferences, symposiums and other official scientific events
– An extensive and international reputation for research and/or enterprise;
– Successful leadership of significant research collaborations (where appropriate);
– Outstanding professional achievement;
– Recognition as a leading expert within their profession or occupation;
– Effective entrepreneurial activity, serving as example for others;
– Unique contributions to their area of expertise.

3. THE PROCEDURE FOR AWARDING OF THE HONORARY TITLE

3.1. The following documentation is required for each nomination:
– a curriculum vitae
– scientific articles, publications
– recommendations from Academic Union members, partners, governmental bodies
– a statement f setting out the reason for the nomination

The documents should evidence the candidate accordance to the criteria described in section 2.2.

Well-founded objections are considered by The Academic Council which makes the final decision.

Presenting of attributes for The Title of Honorary Professor of the Academic Union, Oxford (AUO)
(Diploma, chain and academic robes) takes place in the solemn atmosphere of the Academic Open
Sessions of the AUO and CRE, as well as during international summits, forums and scientific conferences.
The awarding ceremony can be carried out exclusively for the candidate in Academic Lounge.

4. RIGHTS AND PRIVILEGES OF THE TITLE

Privileges:
• Participation in the annual gathering of the Academic Union, expert sessions and special meetings
• Presentation of author’s programmes, researches, innovative technologies on visiting sessions of AUO and conferences
• Reviewing of scientific papers and consulting of candidates from different countries
• Scientific works of AUO laureates are exposed in the Academic Lounge on the permanent basis
• Right of advisory and recommendation voice in The Honorary Professors Council
• Right to enter the jury of the works, presented for the annual competition “Scientist of the Year” by Academic Union, Oxford.